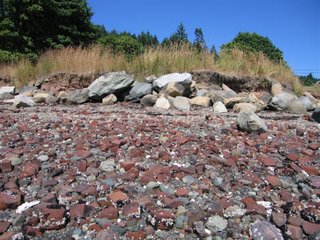 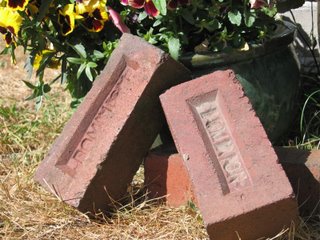 Brickyard Beach across from Mudge Island is a park. In the past it was the site of a very productive brickyard. In 1911 the first company to run the brickyard was incorporated, it and subsequent companies ran the brickyard until the early 50’s, but there is evidence that bricks were being made at this site possibly prior to the 1900’s. The brickyard was near the water line at brickyard beach, the drying and firing kilns were located where Ferne and South Road now converge and up the hillside was the shale clay quarry and assorted buildings. The output was high – in 1912 the average was 75-80 thousand bricks a day, in 1920 more than 3.5 million good quality red bricks were produced. Scows brought coal to fire the kilns and took away bricks to Vancouver and Victoria. Chinese workers did much of the hard labour, housed in shacks near the brickyard site. Many locals also worked in the brickyard. The wage was about $3.50 per day in the 1930’s. By the 50’s coal was depleted and construction had changed from brick to concrete. The buildings were removed from the brickyard site and few traces are left. In 1974 the patch of land between the beach and South Road was designated Crown Land, locals were allowed to dig bricks out and then the area was bulldozed flat, the hillside above grew over in trees and blackberry bushes. Today this is a good beach access where many bits of broken bricks can be seen along the shore. On a visit to any older Gabriola residence you may see some of these bricks being used in fireplaces, garden retaining walls and pathways.