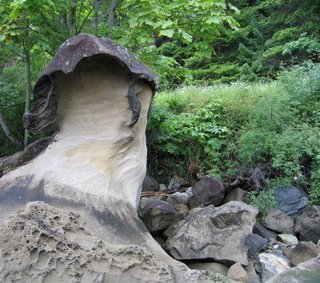 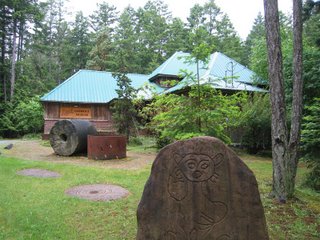 I have lived on Gabriola Island for 30 years yet I know little of its history, I am endeavoring to change that and intend to use the Gabriola Museum as part of my education. This will be the first of several blogs that are meant to explore Gabriola’s past.
During the ice age Gabriola was deeply buried under ice at times almost a mile thick. At the end of the ice age, around 11000 BC, people first immigrated from northeast Asia to Alaska and the Queen Charlotte areas. In the early period after 8000 BC the climate was hotter and drier than it is now. There were no forests on southern Vancouver Island or the Gulf Islands. Only Garry-oak and Doulas-fir savannahs, and grasslands parched in the summer. Land and sea mammals were the most important sources of food. People started populating Vancouver Island at around 7000 BC. Around 4500 BC the climate in this area cooled and became wetter and rain forests began to develope. The earliest evidence of habitation in the Gulf Islands, found on North Pender Island, goes back to 4000 BC. Shell middens became common on the Gulf Islands after 3000 BC, progressively larger more substantial village sites appeared and tools became more sophisticated. The earliest archaeological record on Gabriola is a cave burial radiocarbon dated to about 1500 BC. By 400 BC – 500 AD life became quite compex in the Georgia Strait area with high populations, ranked societies, distinctive artwork, large houses, and wealth accumulation. Evidence of warfare appeared. From 500 – 1774 AD there are strong signs of outside influences, a decrease in political complexity, and towards the end a smaller population (Krakatoa erupted in 535 AD with dust in the atmosphere for 18 months and causing intense cold for a few years). Warfare intensified around 800-1000 AD and persisted until the 1860’s. The Snuneymux, the people of the Gabriola and Nanaimo area, have several oral histories about the battles that they fought. Contact between people on the BC coast and Europeans began with the voyage of Juan Perez sailing from Mexico to the Haida Gwaii (Queen Charlottes). More significant to the local people was the arrival of fur traders on the west coast of Vancouver Island after Cook’s voyage in 1778. In 1782-83 there was a smallpox pandemic that killed two thirds of the population on average and locally more.
Source – article by Nick Doe in Shale journal of the Gabriola Historical Museum Society.