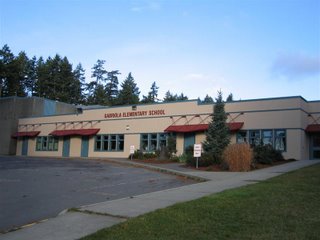 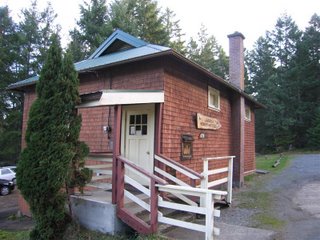 In 1872 when the population of school age children was 15, Gabriola and Mudge Island became part of the newly created Gabriola School District. Land was donated at the site of the present day south end Community Hall and the government funded the building of the first school house on Gabriola. It was 16’x18′ and made of wood.
One third of the island’s children were not attending school due to the traveling distance. In 1878 there were a number of areas of conflict in the running of the school and it closed for two years. School reopened in 1881 with 27 students. Once students hit high school it was customary for them to attend school in Nanaimo, boarding with Nanaimo families.
In 1883 a school house was built at the north end behind the present day post office – this closed in 1889 on failure to maintain the average attendance required by statute.
In 1890 a larger better equipped school measuring 24’x36′ was built at the south end. From 1900-1910 attendence averaged 20 students per year.
In 1893 the north end school reopened and closed again in 1899, reopening 1906 it operated until it burned down in 1927 and was then rebuilt.
From 1919-1936 there was an East school erected behind the little Log Church by the Crockers and eventually dismantled.
In 1936 The Department of Education decided that the higher and lower grades should be taught at separate schools. The East school was closed and the South and North schools became the Gabriola United School District with primary grades taught at the North school and upper grades at the South. In 1936 Gabriola also aquired a school bus and in 1947 the schools became part of Nanaimo School District 68.
In 1954 a new site was choosen for the school on the 11 acre present site. A one room school was built, the North school took the overflow, and the South school became St. Martin’s Anglican Church eventually being demolished. The North school took overflow until a second room was added to the present day school and the Women’s Institute acquired the little North school (see photo). Now there are approximately 250 children attending the Gabriola School, with many additions having been made. Grades K-7 are taught there. High school children go to Nanaimo. There is also Vancouver Island University in Nanaimo.
source, The Shale, article by June Harrison about the 4 schools of Gabriola.